Big update in the house! Since launching an experimental version of League Play a couple years ago, we have been hard at work learning from your feedback and building a bigger and better version. The next major update is now ready for primetime, so let's see what the new League Play can do. Let’s start with a short backstory for context.

In 2015, Outfield’s CEO Austin Rolling and CTO Adam Steele set out to innovate in the field sales space. We began as a mobile-first CRM designed with a clear focus to create tools that support organizations with field sales & field marketing activities, such as territory management, route optimization, and producing advanced market insights for sales managers to improve their field ops. From this success, an opportunity was revealed and we have re-shaped our focus into a bigger vision: solve the two biggest problems in CRM which are 1) rep adoption/engagement and 2) detached outcomes between the CRM and the customer. In this article, we will focus on the former, however you can learn more about what we are doing to solve the latter on our homepage.

Reps should not simply use a CRM because their manager tells them to; rather they need to be using it because they want to. But why would sales reps or any type of rep want to use a CRM? Let’s look at their persona. Reps are competitive, like to help customers find solutions, and are driven to win. Reps like to be recognized for their performance, and the best reps want to master their craft. These characteristics were magnified recently for us at Outfield when we launched experimental performance-based features and studied the feedback.

League Play originally consisted of a simple weekly competition to see who could achieve the highest performance, winner take all. The results were stunning and it sparked a flood of customer feedback, engagement, and ideas. So we dug deeper into game mechanics, behavioral psychology, case studies and a white paper where we interviewed one hundred sales managers on their results when introducing game mechanics to their sales organizations. 89% of sales managers reported that sales productivity rose when gamification was incorporated into their sales execution. Employee morale also rose 90% of the time when sales managers used strategies based on game theory.

As a result, we decided to build a system that changes the game for CRM into one that is not only used traditionally for inspection (e.g. progress reports etc.), but also can actually improve team adoption, engagement, performance, and ultimately increase your bottom line.

Phase 1 of the new League Play consisted of a goals & customizable performance system. This laid the groundwork for the next phase of League Play which we are proud to announce went live this week. Rather than a single leaderboard, League Play now consists of multiple levels of competition and progression so reps can choose to focus on what works for them. As a team admin, you can now run your own performance leagues. The league season corresponds to a calendar quarter & is composed of weekly head-to-head matchups between team members, round-robin style. The competitor with the most performance points based on your customized system wins each matchup & the best win/loss/tie record at the end of the season takes the championship trophy. Additionally, you can now even create multiple tiered performance leagues with promotion and relegation zones so there is competition at the top and bottom of the leagues (English Premier League style).

Head-to-head matchups combined with tiered leagues with promotion & relegation zones each serve to address leaderboard burnout, which is when leaderboards become stale when the same few competitors near the top are the only ones who end up caring about it after a while. In other words, our goal with matchups is to keep each week fresh, which is one step of many toward making CRM more engaging and rewarding for reps to improve and perform well.

Matchups can be created & managed totally automatically or you can fine tune your matchup schedules in the Performance Leagues tab under Performance+ Settings in the Outfield web app.

Reps will then see their current matchup in their side nav drawer on their web and mobile apps.

They will also see the other matchups in their league each week in the League Play section. You can easily segment reps into leagues by role, territory, or any other attribute you'd like. Each matchup can be opened to show a deep dive into each competitor’s performance that week such as with KPIs and other attributes.

Leaderboards haven’t gone anywhere. The leaderboard has been improved to be infinitely customizable so you can dial it in to what's important to you, including your KPIs from your performance system. In an effort to introduce even more layers of competition and progression, leaderboards also now contain the rep’s shadow from last week/month/etc so they can compete against themselves, as well as individual and team goals so they can see how they are doing against the goal pace setter.

There are also a number of achievements reps can earn when they perform well. Tap the Achievements button on anyone's player card to view the achievements they have earned. Tap any specific achievement to view more detailed info about it. Achievements are a great way to see who achieved the most KPIs each week, who holds the record for best month in company history, and more. 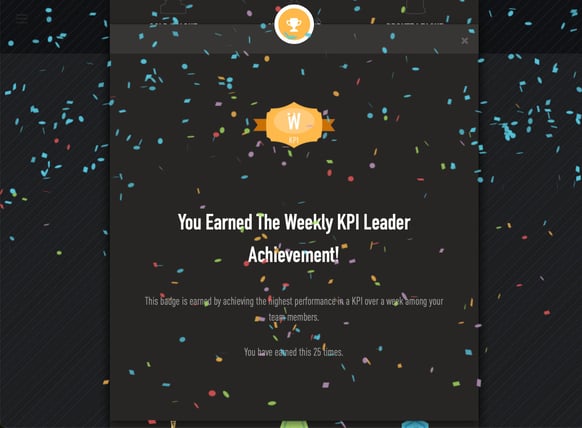 Your rep's performance efficiency rating (PER) is a number from 0 to 100 that represents their current overall effectiveness within the your unique performance system. It is displayed on the bottom right of everyone's mini profile photo and their player card. Reps can increase their PER in a variety of ways such as achieving goals you set for them, hitting their KPIs, and winning matchups against their colleagues. In other words, it's a single number that represents their aggregate performdance based on your unique company goals and customized performance system.

Finally, we have included a number of other improvements based on your feedback and ideas.

Reach out to our customer success team anytime if you would like help setting up your performance leagues and designing a culture of friendly competition and achievement. We can even help you introduce real world prizes and other rewards to your competitions.

We have much more on the way in the next phase of League Play which is already in the works. Keep up your excellent feedback. We appreciate it.

Outfield for Android has been Launched

Outfield for Android has been Launched

Stay In The Know On New Sales Insights

Outfield researches and provides the best sales tools and trends to help you and your team succeed. Subscribe now to be the first to know.