We've been hinting at this for the past few months, but the wait is over! Over the holiday weekend, we launched some big features which lay the groundwork for our expansion toward performance-based CRM. First up is the goals system.

The new Goals section lives in the Outfield web app within the Performance dropdown in the side nav. You can use goals to set quotas, provide incentives, add custom levels of competition for your team, and more. Goals can be set per individual or as a combined goal aggregated from a group of team members. While goals are set up by one of your team admins on the Outfield web app, the progress is displayed on both the web and mobile apps, and notifications are sent out as progress is made.

An obvious example of goal setting is a monthly sales quota for one of your sales reps. This is easily accomplished by creating a new individual goal for a team member, as shown in the following screenshot. 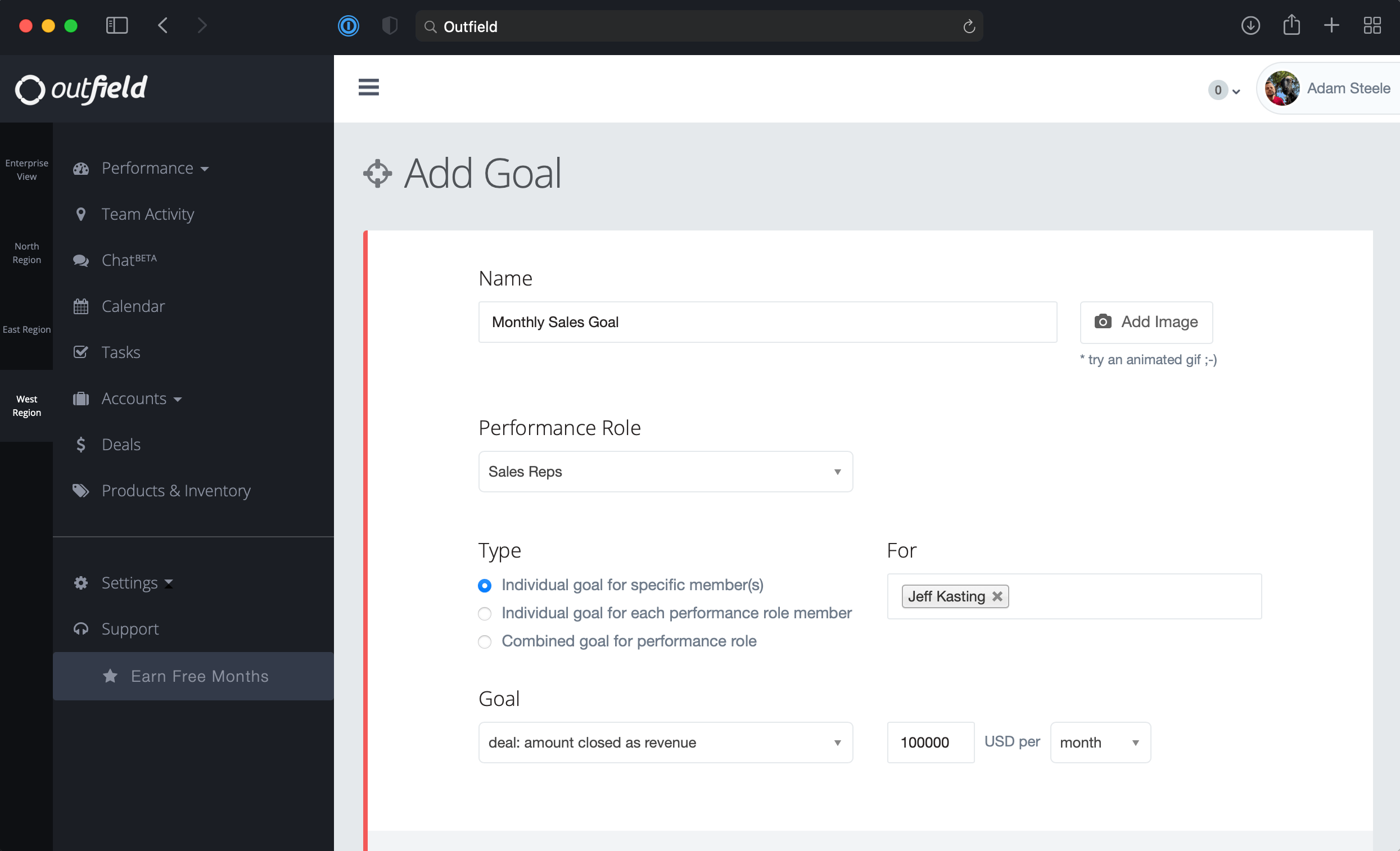 Goals can be set up on a recurring basis (e.g., daily, weekly, monthly, yearly) or on a one-time basis to be completed by any date. Goals can be tied to many different things such as sales, touchpoints, forms, tasks, calendar events, or any other item in your performance system, which brings us to the next big feature we released.

One of the leading feature requests we've received was the ability to customize the point system in League Play. Inspired by such requests, we have built a customizable performance system to allow you to do that and more. The new Performance System section also lives in the Outfield web app within the Performance dropdown in the side nav area. 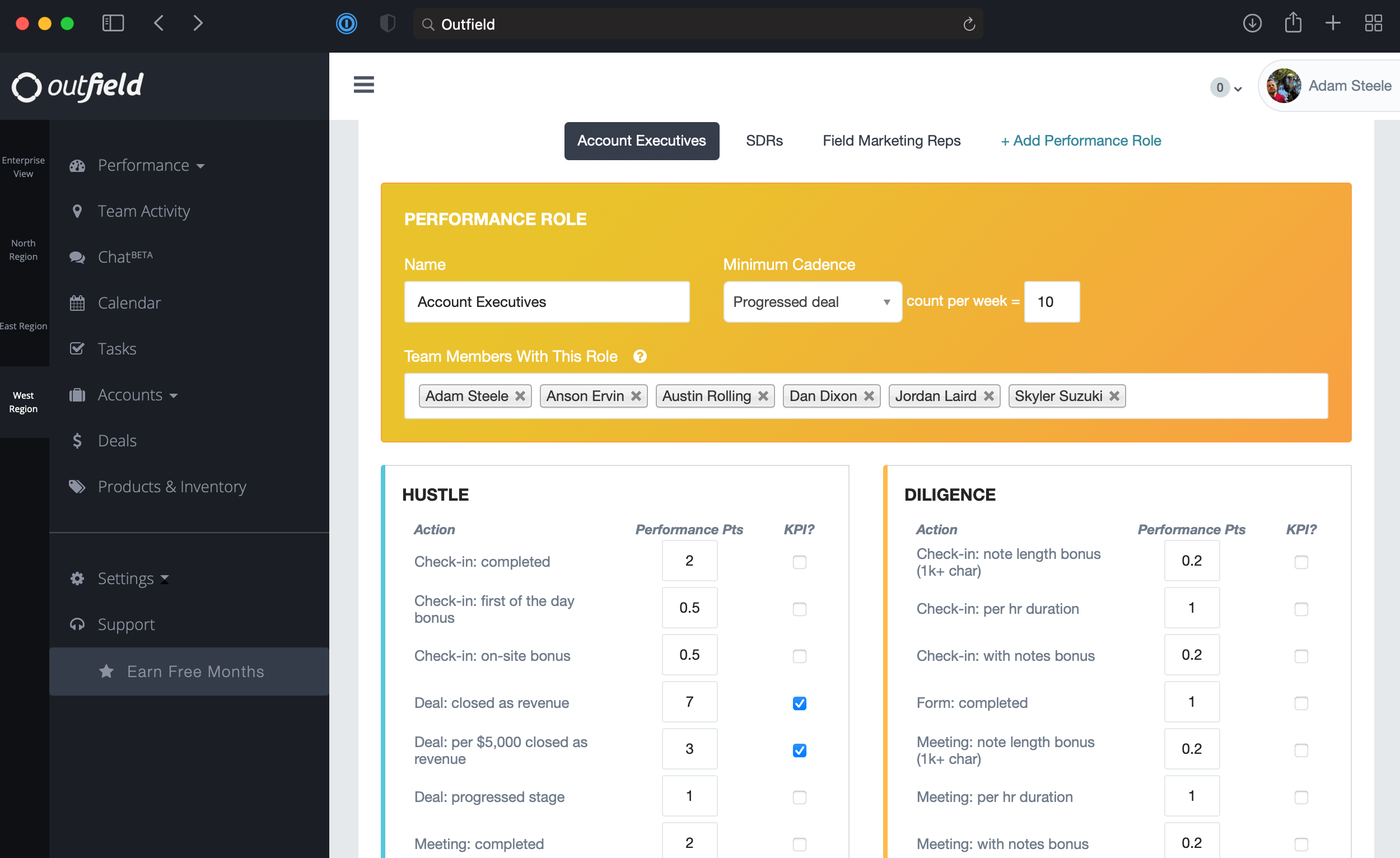 First, you can create a performance role for each type of team member you have, for example, SDRs, account executives, field marking reps, etc. We recommend making this role distinction for team members with differing performance criteria; for example, field marketing reps primarily visit accounts whereas account executives primarily close deals. However, oftentimes teams just have a single role and the default All Reps role will do the trick.

Next, you can weigh your performance system for each role to match up with their minimum cadence, KPIs, and other important workflows. In other words, actions that are more important should be set to get more performance points. Then over time, you will be able to see who is succeeding within your strategy, which brings us to the final big feature we released.

At Outfield, we have always put a lot of effort into allowing you to easily gain insight from your team's data, particularly in our Analytics section of the Outfield web app. Here you will now find a new tab for Goals.

The chart at the top of each of these sections shows this data at a team level as percentage achieved and the table below each chart can be used to dive into the details. For example, you can click any table cell with a positive number in the far right two columns to see exactly who achieved or fell short each period. You can also click any table cell with a goal name to see performance data for any particular goal as shown in the following screenshot. 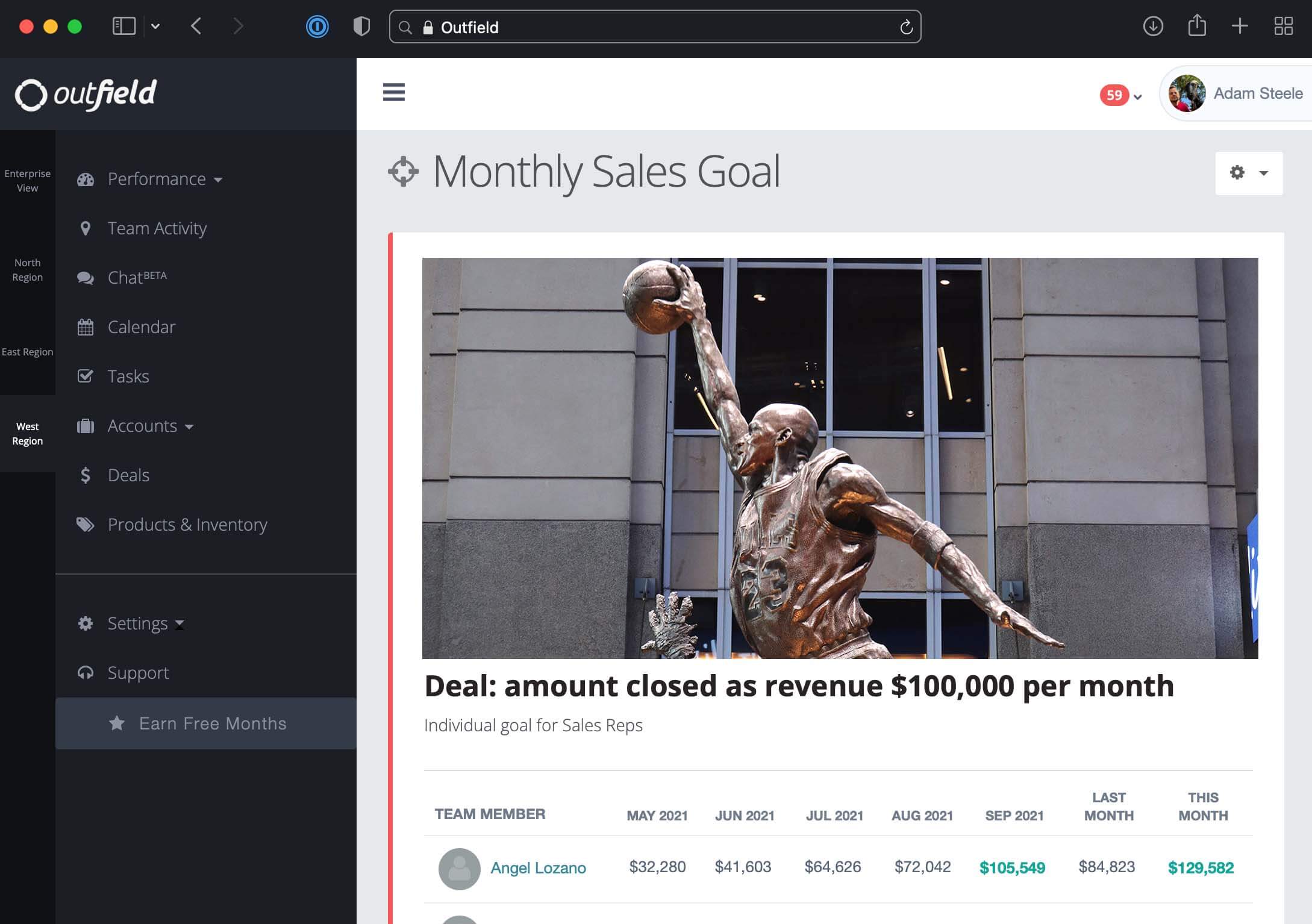 Reach out to our support team any time if you would like to learn more about these new features or have any other questions. As mentioned at the beginning of this post, these features are just the beginning for big upcoming enhancements to League Play™️, performance-based CRM, and more in the coming months. "Getcha popcorn ready!" － T.O.

Oh, and here are a few highlights from other recent enhancements & fixes:

We upgraded KPIs, the performance system, & the goals system yet again so now all three can be linked to your form fields for a customizability...

We launched call and email tracking to Outfield to help you better manage your customer touchpoints both in the field and in office.

We have released two new default performance system actions for goal completion, as well as new custom actions that you can create and add yourself.

Stay In The Know On New Sales Insights

Outfield researches and provides the best sales tools and trends to help you and your team succeed. Subscribe now to be the first to know.